From the courts to the Capitol, an epic labor battle may redefine the shape of the American workplace

California’s Assembly Bill 5, stemming from the California Supreme Court’s Dynamex decision, would make it much more difficult to label workers as independent contractors instead of employees.

E-Scooters: Navigating a new era in transportation proving to be a struggle

Rental scooters are fun and convenient, but casualties keep piling up. As legislation around the country moves forward, consumers hope the micro-mobility industry faces up to its responsibility to ensure the safety of riders.

California interest groups spent a record amount on lobbying in Sacramento in 2018, and most of the biggest spenders did so to tweak consumers.

You may be surprised to learn that California is about the least likely place for a civil suit to be filed, based on its population.

It turns out medical malpractice “tort reform” doesn’t reduce federal health care spending all that much…if at all Friday, May 31, 2019

The fight to increase the number of women in California’s Legislature Tuesday, August 21, 2018

Only one in four members of the California Legislature are women. Valerie McGinty launched a political movement to correct that imbalance.

Several bills are now working their way through the California Legislature intending to create further protections for victims of sexual harassment, sexual assault, and other like claims.

New research shows that regulations and laws adopted over the last 50 years have dramatically reduced the bloodbath on America’s highways.

Big Oil spent big on lobbyists in Sacramento in 2017.

Study: The poor and elderly are “silent victims” of the medical malpractice system

Self-driving cars and the liability issues they raise

Constitutionality of MICRA damage caps argued in Court of Appeal

Survivors can sue over the distribution of death photos

Californians won’t get Prop 65 warning about dioxin in meat

A Los Angeles pharmacy was a little too busy

An honest mistake is not a firing offense

Learn More About DIY Power of Attorney Forms in California

California Power of Attorney Forms enable residents to appoint an agent (a personal representative, also known as an attorney-in-fact) who will represent them in various matters regarding finances, healthcare, real estate, DMV operations, and guardianship. A POA document should be filled out in its entirety to define clearly the powers the agent will receive upon the form completion. A typical power of attorney will explain in detail the extent of the agent’s authority and when the agent gains this authority.

There are several common types of power of attorney forms that fit different circumstances. Consider taking a look at these in more detail to determine which one you might need and when.

A California durable power of attorney form grants someone the ability to act for another person in fiscal matters throughout their life. This power is commonly granted to a trustworthy friend or family member, who is officially called an agent. The principal authorizes their agent only to perform the duties outlined and initialed in the document. It is important to note that the power granted to the agent, in this case, is “durable.” This means that it will not be affected if the principal becomes incapacitated.

A California financial power of attorney form allows you to designate someone to handle your financial and property affairs on your behalf. Some of the tasks your agent can take care of include paying your bills, making bank deposits, securing insurance benefits, and many other things. You can customize what powers your agent can get and under which condition. For example, you can designate that such a POA is effective only during a specific period.

A California medical power of attorney form allows another person to make your health care decisions on your behalf. The document will take effect on the date or event you specify when filling out the form. However, the most typical scenario is to activate it in the event you become incapacitated and unable to make your own medical decisions. It might be a part of a larger medical document – the Advanced Health Care Directive.

A California springing power of attorney form is a POA that “springs to action” only under certain conditions. A typical condition a principal can set is their mental or physical incapacity. So it will “activate” in case something renders the POA creator incapable of making decisions for themselves. This type of power of attorney is often used by people serving in the military abroad.

A California real estate power of attorney form is a type of limited POA that allows an agent to handle only matters related to the principal’s real estate property. A common practice is to appoint a real estate agent as your representative. The powers include transferring the rights to property, managing tenants, completing transactions, etc.

A California DMV power of attorney (REG 260) form allows you to designate an agent for vehicle-related matters. It’s an official form provided by the California Department of Motor Vehicles to enable residents to have a reliable person sign various documents related to motor vehicle registration or ownership transfer on the principal’s behalf.

A California tax power of attorney (form 3520) is a legal document you can use to give another person (a representative) authority to handle various Franchise Tax Board matters on your behalf, which includes getting access to your tax information and filing documents. The FTB 3520 form can be used by individuals, fiduciaries, as well as business entities.

What happens to a power of attorney after death? Does it end? How long does a durable power of attorney last overall? Read to learn more about the validity of POAs upon the principal’s death and when such a document expires.

Who can be a witness for a POA? And do I have to notarize it? Check more details about the power of attorney witness requirements and whether a POA document has to be notarized to be valid in the State of California.

I heard it's better to create an advance directive for health care purposes in California, what's that? It combines a living will and a medical power of attorney. By using this medical document, you can appoint an agent to make medical choices on your behalf and pick end-of-life treatment options in case you cannot do it yourself. It is advised to use this form if you are about to undergo a risky medical procedure or at a later age.

A POA document can grant quite a lot of authority, so cases of misuse happen from time to time. Before creating this document, learn more about power of attorney abuse and how to prevent it. You will also read learn what types of abuse there are, what consequences the agent can face for it, and what to do if you see that a POA is misused. 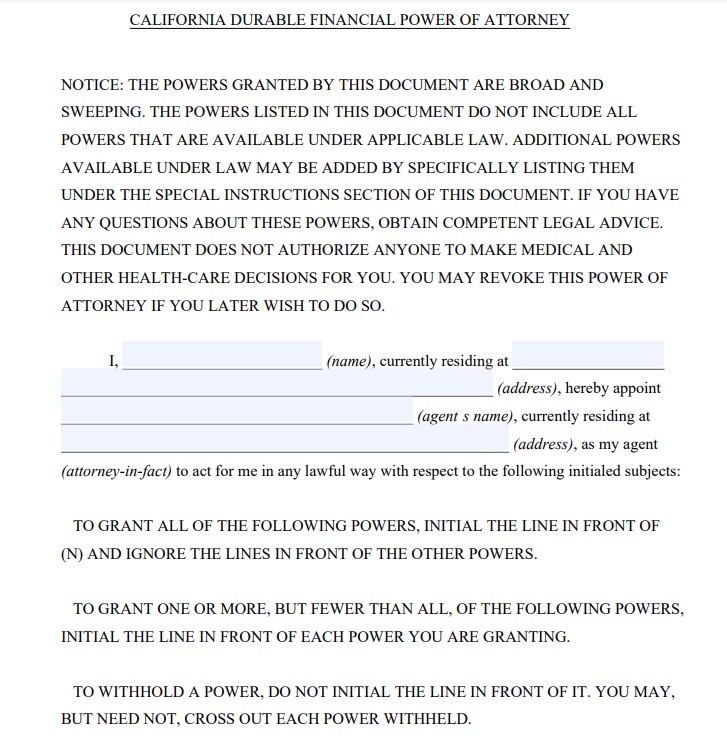 This site aims to honestly report on consumer, legal and political issues important to the American civil justice system.

The bulk of the articles will be researched, written, and edited by people who understand the importance of factual information, particularly as traditional news sources and information shrink. We will gather information from a variety of trusted sources and present it without rhetoric and bombast.

The main contributors are veterans of the news industry.

Eric Bailey spent 26 years as a reporter for the Los Angeles Times, covering major state and national stories. He has written extensively about the environment, drug policy, and state government. In 2000 he covered the presidential campaign and the Florida recount. He was a member of the Times’ state capitol bureau in Sacramento before joining Consumer Attorneys of California as communications director in January 2010.

J.G. Preston also has three decades of news experience, including 20 years working for public television in Minnesota and four working for commercial television and radio in Sacramento. In addition to his work on this site, Preston is press secretary for Consumer Attorneys of California.

We at ProtectConsumerJustice.org do take a stand. We believe in the importance of the 7th Amendment and the civil justice system. There is nothing frivolous about that system. As reporters, we found that the civil court system was an unending source of interesting and important stories. We will continue to tell those stories as we ply our trade at ProtectConsumerJustice.org.

ProtectConsumerJustice.org is a project of Civil Justice Research & Education Project, a nonprofit corporation set up under the Internal Revenue Code. Seven attorneys founded the project in 2005 to enter the public debate in defense of the civil justice system and counter the attacks on it. Their goal was and remains to protect your right to access the courts.

We support good business people and know the vast majority are honest. But some moneyed interests seek to restrict individuals’ access to the courts for their own selfish reasons. They have spent untold millions on a sophisticated campaign to denigrate the importance of the civil justice system and the 7th Amendment right of individuals who have been wronged to a jury trial.

The reason for the attack on the civil justice system is clear. America’s court system is a great equalizer. Though not perfect, the court system allows paupers to stand as equals against industrial titans. Through the 7th Amendment, individuals can hold the world’s largest corporations responsible for their greed, pollution, defective products, and rip-offs.

Thank you for visiting our site. We hope you will come again as we regularly update the news and expand the site. Please take the time to send us your comments and suggestions.